As I finish writing this, the brouhaha over comedienne Michelle Wolf’s performance at Saturday night’s White House Correspondents Association dinner is in its fourth day. The response has been predictable: The political and media right is damning Wolf; their counterparts on the left are praising her. 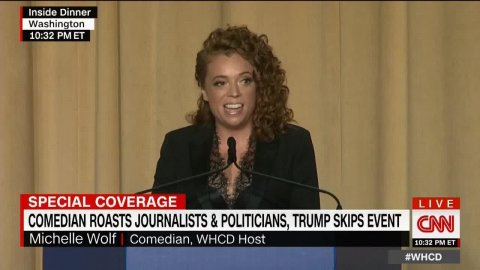 I am a true blue Democrat, but I did not care for her act. My issues have more to do with style than substance. Many, if not most, of her jokes and digs were funny. However, her delivery was off. Ms. Wolf failed to connect with her audience. Much of the material landed like a leaden matzo ball.

My wife, who has done stand-up comedy and shares most of my political views, had the same opinion. Her biggest concern is that this set the cause of women in comedy back decades.

The best I can say about Michelle Wolf’s set is that it spared me the agony of watching the New York Mets get blown away by the San Diego Padres. Ms. Wolf did have some hits, but so did the Mets, just not enough.

Marketing and media relations pros know that to succeed you need to understand your audience and tailor your pitch accordingly. You wouldn’t pitch the same kind of story to a tabloid like the New York Post as you would to a more staid publication like The New York Times.

But what of Ms. Wolf’s audience? Everyone whom she targeted was fair game, even if some of her barbs were unkind. They are at the top of the food chain, so they should expect it and accept it. I learned long ago not to dignify attacks with a response. Besides, you could give your critic more ammo.

That’s what I did once when I was a journalist. The head of communications for a new cable network chewed me out over a report on his channel’s debut that I thought was “fair and balanced.” My next story, however, truly was damaging and ran on the front page. I wasn’t after revenge. I was just trying to make sense of what was going on. That is what reporters are supposed to do.

One of Barack and Michelle Obama’s most endearing traits was that if they were irked by the attacks lobbed at them they never let it show. The same cannot be said for the current President.

The man who taunted his political foes with names like “Crooked Hillary” and “Little Marco” and his supporters seem to be rather thin skinned. Should that have given Ms. Wolf cause to be more cautious?

As any court jester could tell you, when you poke fun at the king you better make him laugh. However, that’s a tall order with the current occupant of the White House. He is as dour a person as I’ve ever seen.

Perhaps, as Joe Concha, a media reporter for The Hill pointed out, Michelle Wolf’s real audience wasn’t the folks in the room at the Washington Hilton, the viewers on C-SPAN or the President, his men and his women. She might have been playing to her “Daily Show” fans and the people she hopes will tune in to her new series on Netflix.

Regardless, she has changed the conversation. People who should be talking about Trump’s weekend speech in Michigan, the Mueller investigation, North Korea and other serious matters are talking about her. If what she did last Saturday night in Washington pays off in ratings, I will tip my hat to her. “Well played, Ms. Wolf. Well played.”

One thought on “Wolf Howls and Washington Quakes”